Home News Local News Atubiga expresses disappointment at NDC: “I went to prison because of NDC”

Mr. Stephen Atubiga has expressed disappointment at his suspension from the National democratic Congress( NDC).He said he suffered for the party and even went to jail as a result of his party-focused activities hence his displeasure over the development. 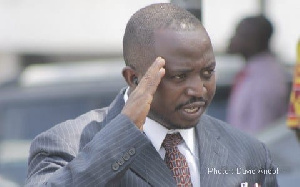 He said he suffered for the party and even went to jail as a result of his party-focused activities hence his displeasure over the development.

“As a man 28 years of being with the party, in good standing never committed any crime against the party, I have gone to prison for this party nobody ever called to ask me, my brother, how are you doing, that you went to prison in the interest of the party. Neither was I rewarded or given any job for me standing up for the party,” he told Johnnie Hughes on the Mid Day news on 3FM Wednesday, March 24.

By the letter dated Tuesday, March 23, his matter has also been referred to the party’s Disciplinary Committee for further action. It comes on the heels of the expulsion of former Central Region Chairman Bernard Allotey Jacobs

Mr Atubiga, who came to the limelight as a result of his conviction by the Supreme Court during the 2013 election petition, is said to have vented disparaging and unfounded comments about some of the party’s key senior members including former flagbearer aspirant Professor Joshua Alabi.

Narrating what may have accounted for his suspension, he told Johnnie Hughes “Alabi’s issues wasn’t part of the agenda of my invitation It was after we have finished then surprisingly the national chairman Ofosu Amofo pulled that surprised on me that colleague Alabi called bitterly to complain that you said something about him that he is not happy.

“And I said chairman this could be discussed by the back door. But no problem I will find time personally and meet alibi and ask him what I said that he is not happy then I will apologize. If I knew that it was going to be official on the letter I would have asked that it be discussed lengthily or I would have said they should give me the opportunity to explain. That didn’t happen I wasn’t given an opportunity to explain my story neither wasn’t told the exact words I said. I took it that that issue was going to be a gentleman’s agreement.

“So when the party served me a letter that it was one of the issues of my apology, I was really disappointed. I said since I would be sending a petition to the party about certain members holding office during the lections through whose actions and inactions made us to lose, I was supposed to add it to also petition the party saying I have not been treated fairly telling me to apologize.

“Nowhere in the constitution does the party say that the party can interfere in the people’s personal issues only when it comes to the interest of the party. I have every right to criticize Alabi constructively for being the campaign manager of the party for not doing what he is supposed to do and failing us for the EC to rig the elections for our opponent. It is my right as a party member to it criticize Alabi not him personally his office to criticize it person, the party leadership

“I am taking a stand that the party’s stance on Alabi, it is selective, it is unconstitutional, and my fundamental rights as a member of the party is being taken from me, my freedom of speech of my party which stands for probity and accountability is also being ripped from me and that is where I have a problem.

A number of NDC pillars have been either suspended or sacked. Samuel Koku Anyidoho and Srephen Atubiga have been suspended whiles Allotey Jacobs has been sacked by the National Democratic Congress(NDC).

Doctor saved Brisbane from lockdown after she was infected by a...

Atlanta Braves disappointed MLB decision to strip the city of 2021...

Australian airfares could surge 20 per cent on pre-Covid levels after...