Home News Business Government has saved the nation US$1.426 billion in the power sector –... 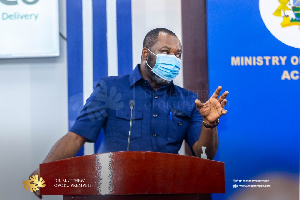 On Sunday,16th May, 2021 in a Accra, the Minister of Energy, Dr. Matthew Opoku Prempeh in a media meeting dubbed; “Ensuring Reliable and Affordable Power within the Energy Sector” said the government since 2019 has saved the nation US$1.426 billion for  deferment of three emergency Power Purchase Agreements (PPAs) of Early Power Plant, Jacobsen Power Plant and Rotan Power Plant.

This was due to the government prudent and rationalisation of the 40 PPAs signed by the formal adminstration under the National Democratic Congress (NDC) government headed by Ex-President John Dramani Mahama when the country was bedeviled with power outages popularly known as ‘dumsor’.

Additionally, the ruling government saves the nation US$445 million annually in the power sector because of prudent management of the energy sector, he added.

British Olympic chiefs to speak to government about athlete vaccinations ahead...

January was the deadliest month of the pandemic since it began...