Senator Manny Pacquiao, an astute boxer has awakening his interest to run for presidential slot in Philippine after he officially informed the public of his retirement from boxing.

The Boxing legend having served his country as a senator for some years now has eyed the Presidential seat to become the first gentleman of the land to expand his territories of goodness and development to his country. Manny has been of immense help to his people in diverse ways and so he is cherished by many.

Pacquiao has some outstanding achievements as a boxer winning  62 fights out of 72 fights, losing 8 fights with 2 draws. He has won 12 world titles is numerous weight divisions during his 26 years of bouts.

The boxer and politician many this known on his Facebook page;

“As I hang up my boxing gloves, I would like to thank the whole world, especially the Filipino people for supporting Manny Pacquiao. Goodbye boxing. “It is difficult for me to accept that my time as a boxer is over. Today I am announcing my retirement.” 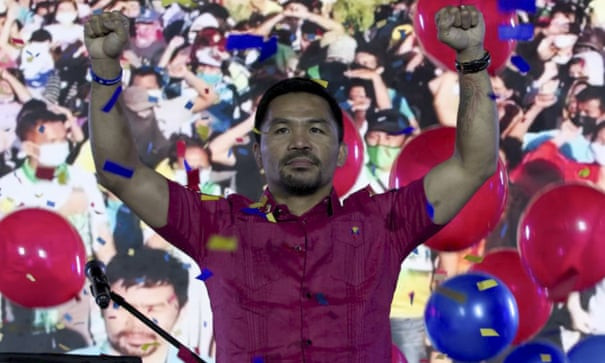 “Thank you for changing my life, when my family was desperate, you gave us hope, you gave me the chance to fight my way out of poverty. “Because of you, I was able to inspire people all over the world. Because of you I have been given the courage to change more lives. I will never forget what I have done and accomplished in my life that I can’t imagine. I just heard the final bell. The boxing is over. ”

Piers Morgan slams ‘bullies’ on US chat show The Talk for...

Man arrested for threatening to kill Democrats at Biden’s inauguration

SUV flies through a T-intersection and slams into a ute in...

Ex-teacher, 63, trampled by COWS while walking her dog spent eight...