Mr. Gabby Otchere Darko, an integral part of New Patriotic Party (NPP) machinery has given his opinion on whether or not former first lady should pay the allowances paid her by the state whiles her husband, John Dramani Mahama was a President of the Republic of Ghana on his twitter handle. Mr. Gabby Otchere Darko states that Mrs Lordina Mahama doesn’t have to pay allowances received but her husband to be blamed for not doing the right thing at that time.
He further explained that former President Mahama should have used the constitutional provision to set up Emolument Committee to look into payment structure of Mrs. Lordina Mahama.
“Leave Lordina Mahama alone! She doesn’t have to refund her alawa. Not her fault her husband who says he believes in the 2011 Constitution Review Commission Report’s recommendation to set up an Independent Emoluments Committee yet he never ever saw the need to attempt to do it.” Gabby’s tweet say. 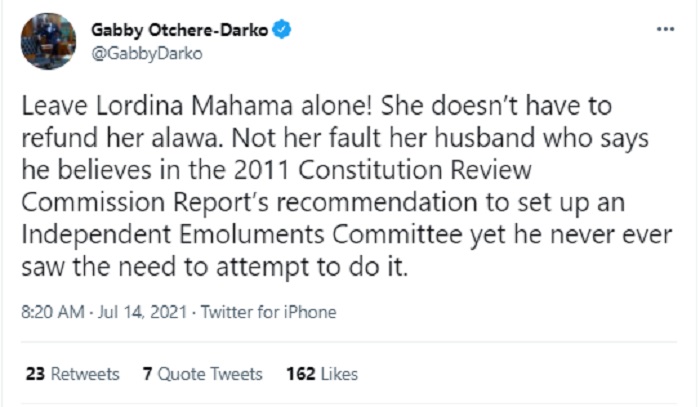 This reactions from Gabby has come about after incessant pressure has been mounted on former first lady to pay allowances she received as the current first and second ladies, Mrs. Rebecca Akufo Addo and Samira Bawumia have done by the Chairman of NPP, John Boadu and majority of Ghanaians.

National Communication Officer of the National Democratic Congress(NDC), Sammy Gyamfi upon the interview he granted Okay FM last Tuesday 13th July, 2021, that former first lady was paid GHC8000 every three months, and not has been wrongly speculated by the media.

He explained that apart from the quarterly allowances, she was given office for her charity work and government paid for all operational costs as well as cars for that worthy course. His submission also included the fact former President Rawlings were also giving allowances to former president wives whose husbands had died such as Fathia Nkrumah, Busia’s wife,etc.

“The agreement was that all former first ladies who were facing some challenges were going to receive some allowance every three months. The Rawlings government did for Fathia (Nkrumah), Busia’s wife and other former first ladies.

“They also did it for sitting spouses that every three months, they’ll be given some allowances. The money was not huge. In fact, former first lady Lordina Mahama took GH¢8,000 every three months. The allowance was not the only thing the country did for them, they were given offices for their charity works and other activities. Government paid for the operation of their offices and gave them cars,” he added.

Mrs Rebecca Akufo Addo decision to refund her paid allowances since 2017 till date was her own choice and that does not mean that other former first ladies should compulsorily do same.

Florida woman, 42, arrested for being drunk and disorderly at motel...

Donald arrives at Trump Tower as Republican 2024 hopefuls speak at...