“Our government listens and cares”-Dr. Bawumia

Recently there had been incessant campaign on “Fix the Economy”.However, the Vice President of the Republic of Ghana His Excellency Dr. Mahamudu Bawumia says the government of NPP listens and cares for the people of Ghana and that their mandate is to fix the economy which they have started since the last four years, but more work is on-going to fix the economy as second term in office just began.

He intimated on his social media wall that during the last four years the work of the government of President Nana Akufo Addo speaks volume considering facts and data.“Ours is a government that listens and cares. The facts and data speak for themselves,”he reiterated that despite the adverse effect of coronavirus which has affected the world’s economy in general.

“We are four months into our four year mandate. The job of government is to fix problems. This is what we have been doing since 2017,” Dr. Bawumia wrote.

He added: “The COVID-19 pandemic has slowed down the global economy and caused increases in prices of commodities such as oil, cement and iron rods as well as overall cost of shipping.

“Nevertheless, it is very important to place the performance of our government over the last four years after inheriting an economy with “no meat on the bone” on record. 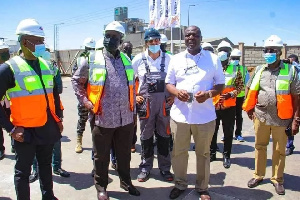 One of the important programmes of the New Patriotic Party (NPP) government is to promote industrialization through its’ flagship programme called 1 District 1 factory(1D1F) so far according to the Ministry of Trade and Industry, Ghana has completed over 70 factories with over hundred factories under various stages of completion. One notable local investor Mr. Ibrahim Mahama has invested in Cement production called Dzata Cement.

This has attracted the Minister for Trade and industry Mr. John Alan Kojo Kyeremanten to visit the factory in Tema to have first hand experience and in his remarks showered praises on Mr. Ibrahim Mahama the founder of Dzata Cement Limited for such a feat in investing over US$100 million on a 10-acre land near the Tema Port.The Minister also took the opportunity to encourage local investors to invest locally. “That is why l think this particular investment should pave the way for investments in industries which otherwise have been dominated only by foreign companies,” he added.

According to source, the cement factory produces 120 bags of cement in 1 minute which is quite remarkable. This means that the factory can produce 57,600 in 8 hours.

This is going to promote quality and competition in the cement industry since there are a number of factories producing cement already. This would increase employment and increase GDP as well.

Atalanta is a threat even without a point to prove –...

Woman struggles to parallel park and is helped by a Good...